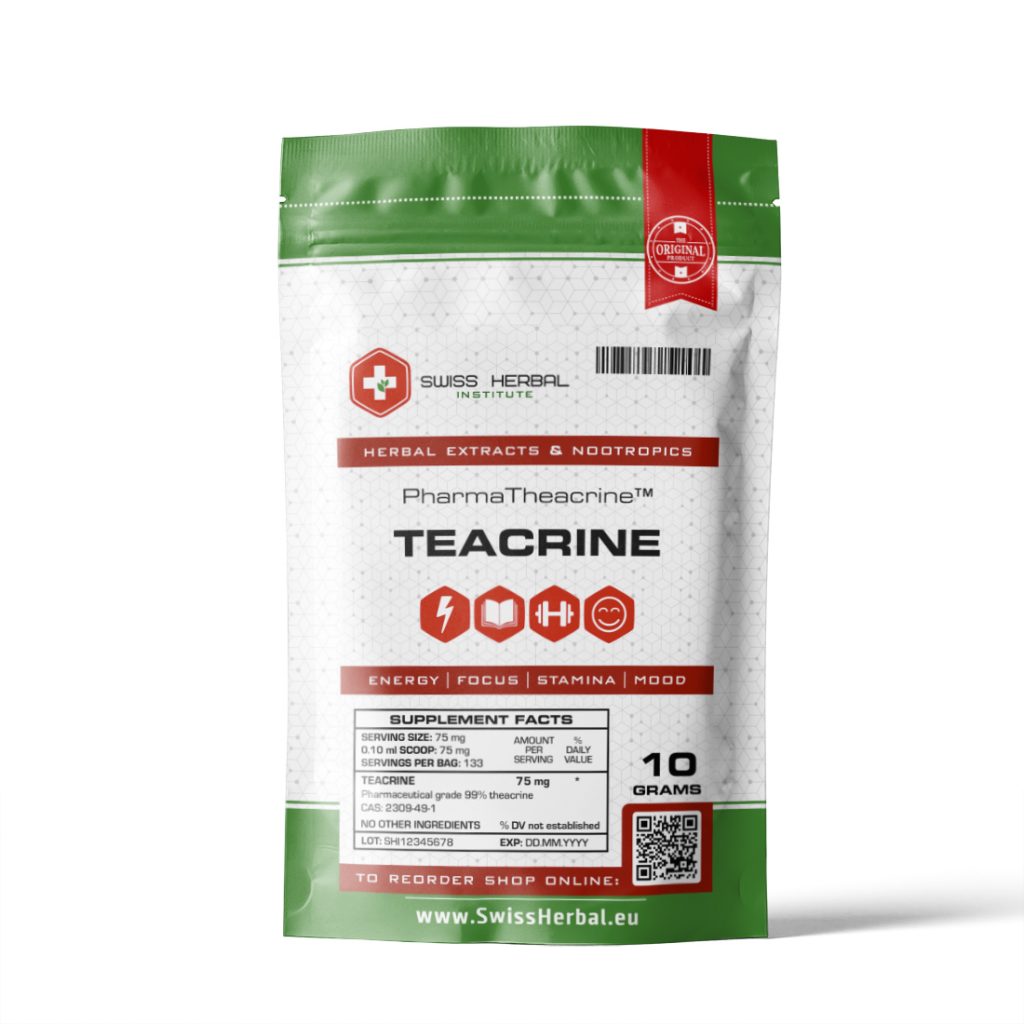 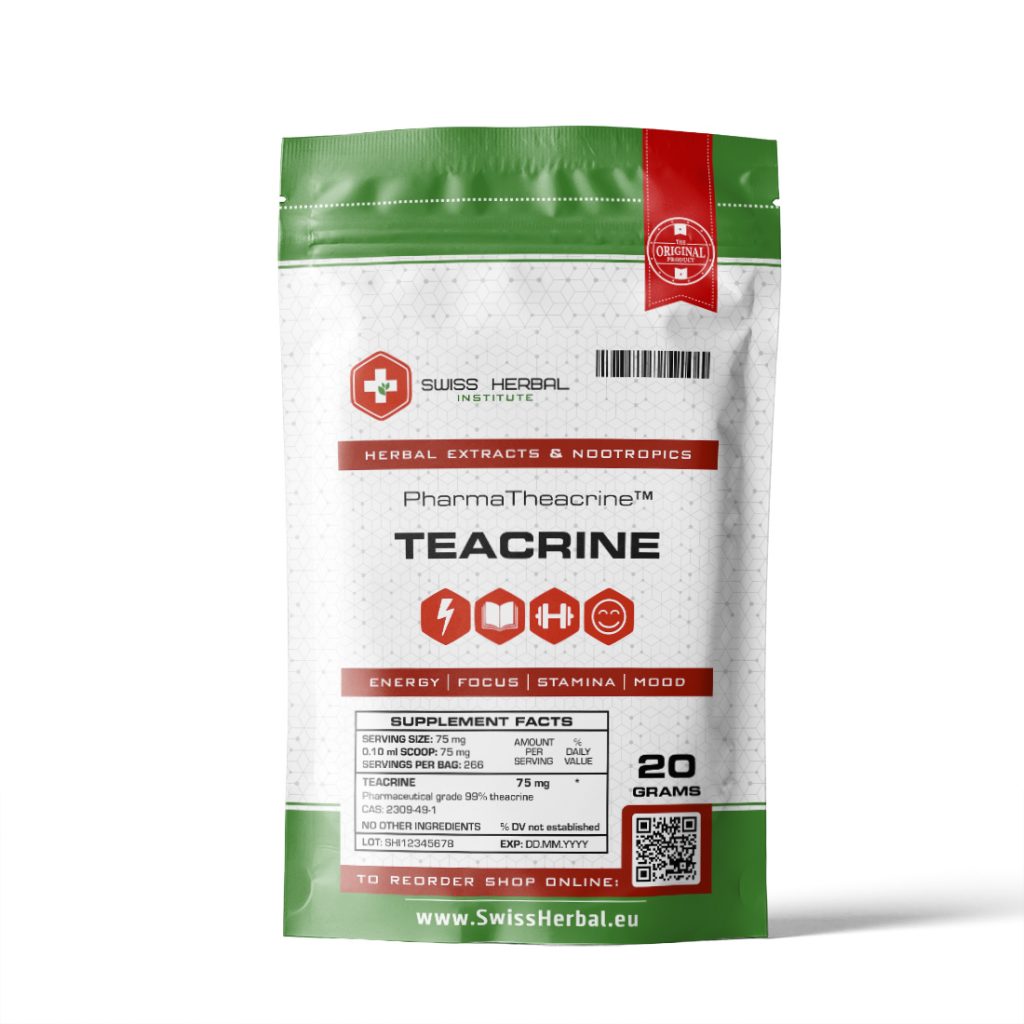 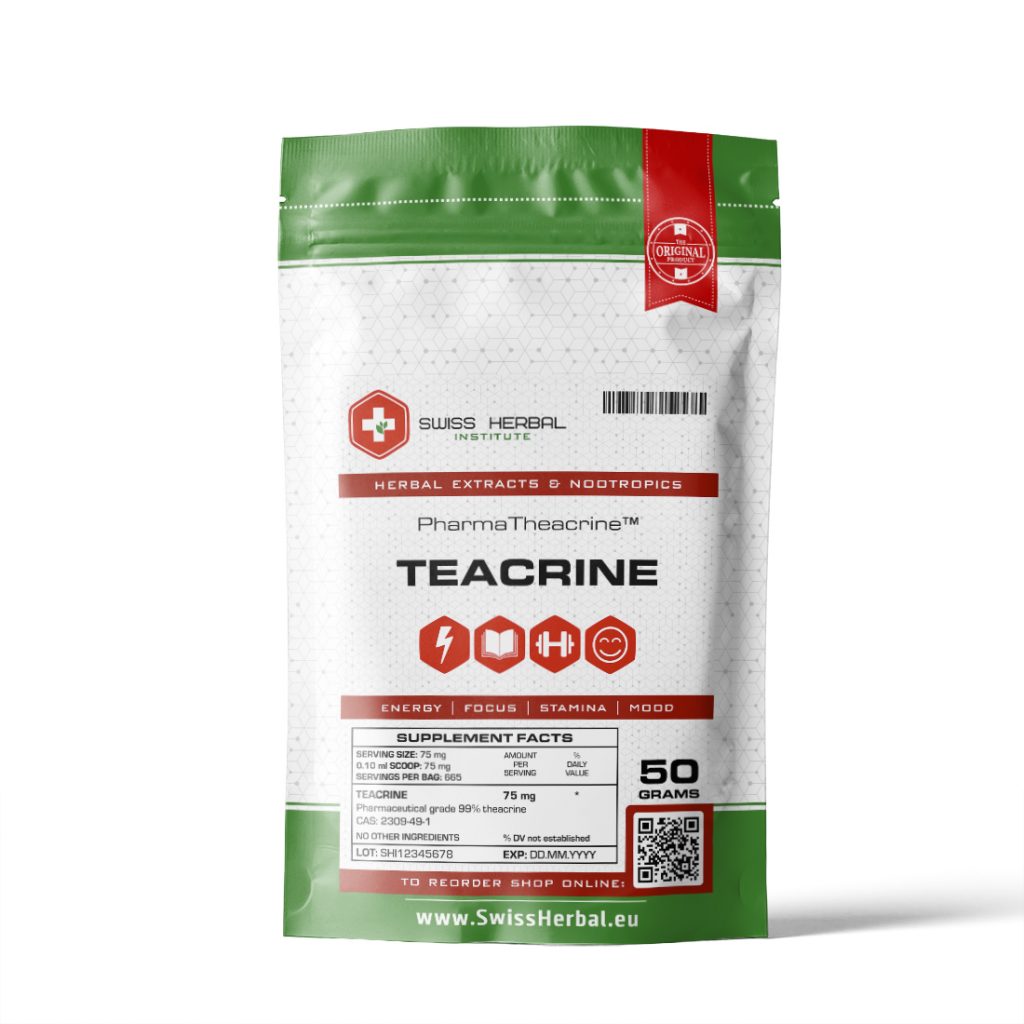 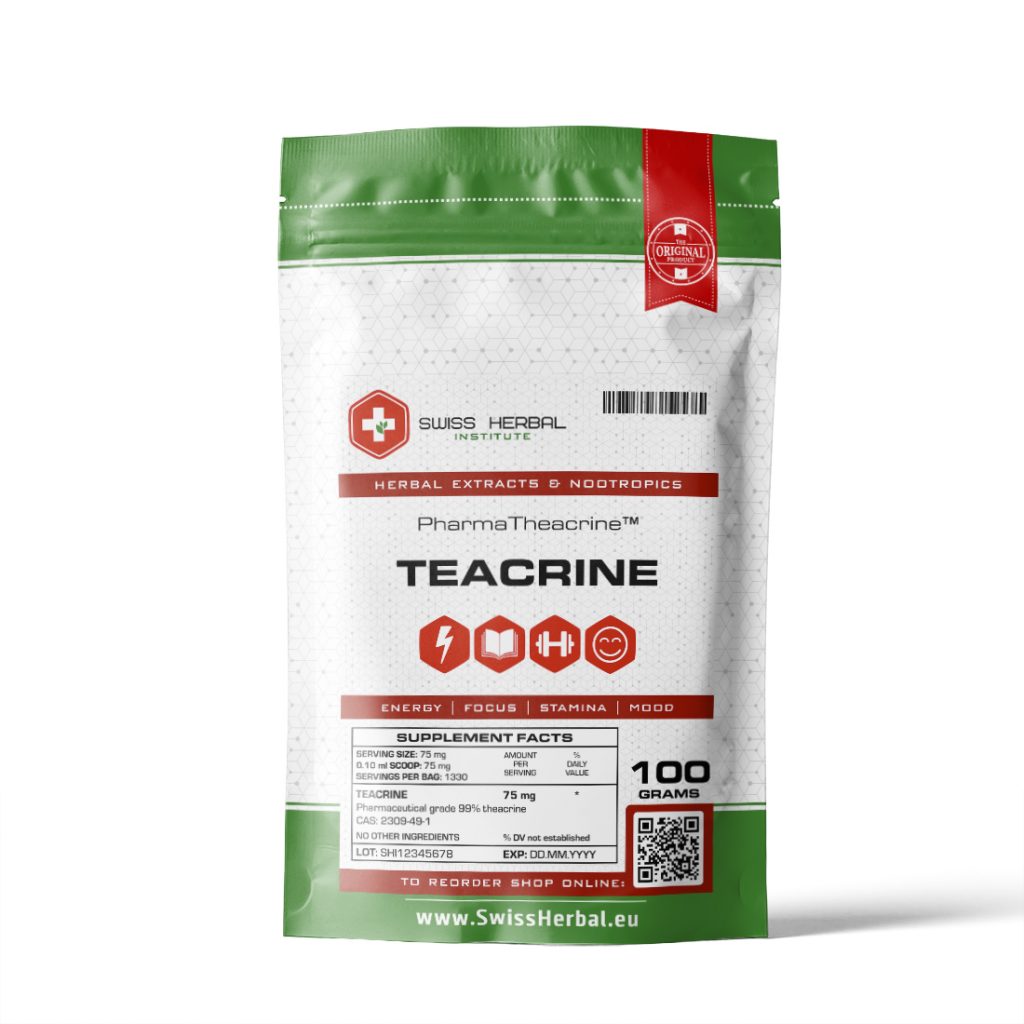 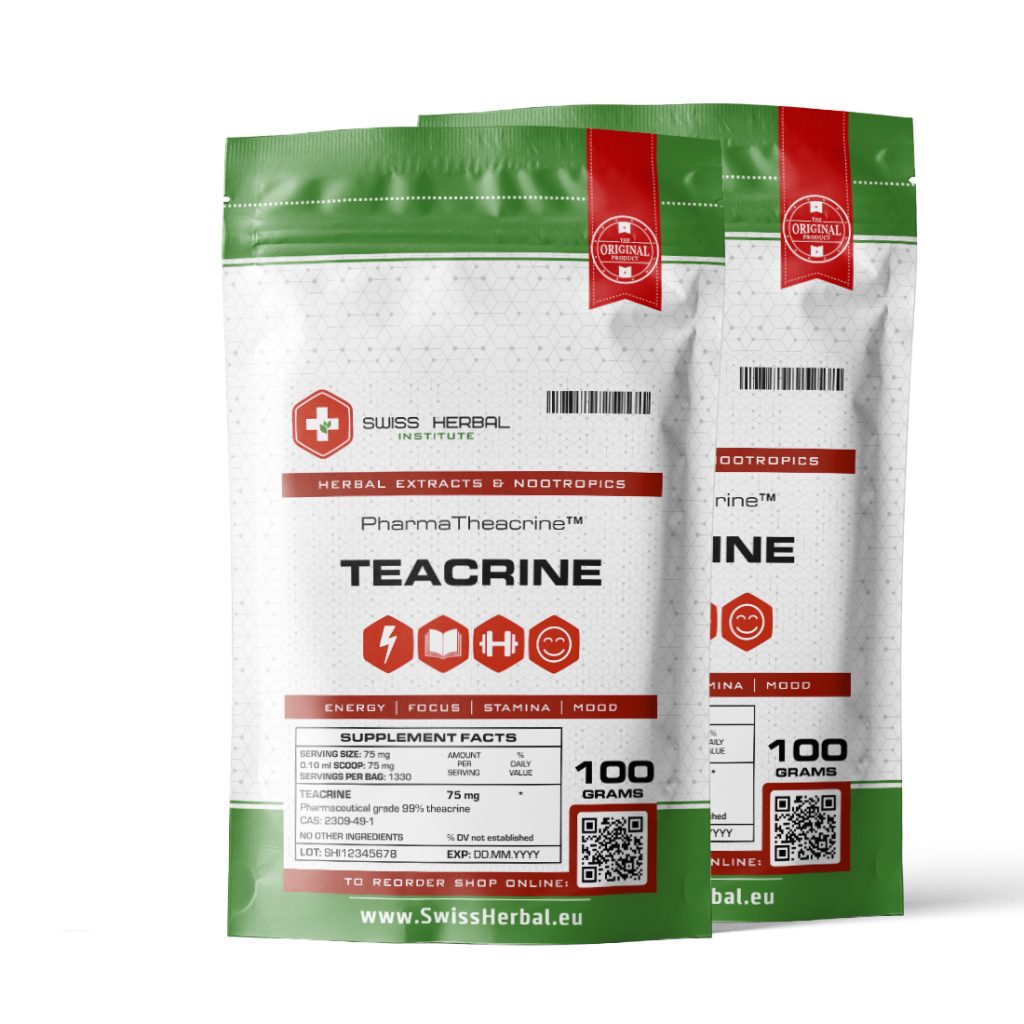 Theacrine is a “better version” of caffeine. It stimulates motivation and helps to focus but does not raise blood pressure or make one agitated which might occur after drinking too much coffee. It works more subtly, but longer than caffeine, and also helps to maintain a good mood. Theacrine, unlike caffeine, does not induce tolerance and therefore has a stronger effect.

Be the first to review “Theacrine 99% | PharmaTheacrine™” Cancel reply

Properties: Theacrine is a plant alkaloid that is very similar to caffeine. Like caffeine, it belongs to the group of stimulants – substances that speed up the central nervous system. Although it does not add energy per se, it effectively helps the body find it within itself. First of all, it inhibits the rise of sleepiness – a process that already begins when you wake up. In addition, it gives a certain amount of motivation and increases work efficiency, as it facilitates focus and attention. This is caused by the ability of theacrine to naturally increase the activity of dopamine – an excitatory neurotransmitter that is responsible for the feeling of satisfaction and contentment.

That is the reason (not the only one) of an increased mood that can be seen in studies conducted on theacrine. It turns out that both regular and occasional use of it result in a noticeable improvement in mental comfort and general satisfaction with life. It is also often used by athletes because it has a mild analgesic effect. Combined with stimulating and motivating properties, this makes theacrine an ideal addition to the pre-workout mix. It is also very important that cases of developing tolerance to theacrine have never been reported. So if you want to be able to perform longer and more intense workouts or increase your efficiency at work, try to familiarize yourself with this compound. If at, let’s say, 1 PM you are faced with the choice whether to fall asleep in front of the computer screen or drink a third coffee and “walk on the walls”, theacrine is definitely a great choice for you.

Occurrence: Theacrine occurs naturally in plants where it is synthesized from caffeine. Its sources include the leaves of the Camellia assamica – Assam tea, a plant related to Chinese tea (Camellia sinensis), and the fruit of the Cupuacu (Theobroma grandiflorum) cocoa tree related to the Theobroma cacao.

Biochemistry: Theacrine is an organic chemical compound that belongs to the group of purine alkaloids. In plants, it is probably produced by methylation from caffeine and then stored in the leaves. In terms of its chemical structure and mechanisms of action on the human body, it is similar to caffeine. It increases the level of dopamine and affects the action of adenosine and the activity of serotonin.

Fun fact: One of the best known sources of theacrine is a drink called Kucha. It is made from dried Assamese tea leaves (Camellia assamica). Assamese tea differs from its sister species of Chinese tea (Camellia sinensis) mainly in the appearance of the shrubs, which are much larger. Its leaves are also bigger, yielding more abundant crops. This type of tea was discovered in 1835 by an East India Company officer, Robert Bruce, who took part in an expedition to the Assam region that is located between India and Burma.

How does Theacrine | PharmaTheacrine™ work?

Increases energy: The stimulating effect of theacrine is caused by its influence on the adenosine balance in the central nervous system. Adenosine is an inhibitory neurotransmitter. During sleep, its level drops while during wakefulness, it rises to make one feel sleepy at the end of the day. Theacrine is an antagonist of adenosine receptors – it blocks them, suppressing the sleep-inducing effect of this neuromediator. There is another positive effect of theacrine. This alkaloid also increases the activity of dopamine – an excitatory neurotransmitter, which is a specific source of energy for brain activity but it also gives more energy for the entire body.

Supports concentration: Dopamine is a key neurotransmitter in the process of focusing attention on a specific task. It is also necessary for the so-called multitasking, which is basically a smooth transfer of attention from one activity to another. Since theacrine increases the activity of dopamine in the central nervous system, it positively influences both of these processes. This has been proven in a clinical trial. The participants reported improved attention and concentration after supplementation with this alkaloid.

Improves physical performance: Theacrine stimulates the activity of dopamine in the central nervous system. This causes an increase of energy levels and motivation to exercise. It has also been shown that the action of this compound allows to reduce the perception of pain, due to which its use allows people to perform even very strenuous workouts. Since it has anti-inflammatory and antioxidant properties, it prevents damage to muscle cells due to free radicals or inflammation.

Supports good mood: Two neuromediators are mainly responsible for a good mood: those are dopamine and serotonin. It has been proven that theacrine increases the level of dopamine. The results of scientific studies show that it has a similar effect on the activity of serotonin. It has also been observed to increase the activity of a brain region known as the reward system. This region is associated with the feeling of pleasure. All these facts suggest that the use of theacrine can be effective in improving one’s mood and overall well-being.

How to use Theacrine | PharmaTheacrine™?

How to stack Theacrine | PharmaTheacrine™? 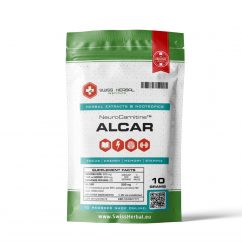 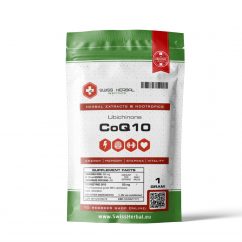 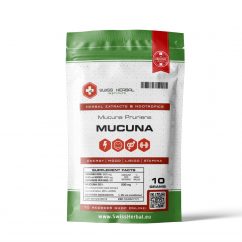 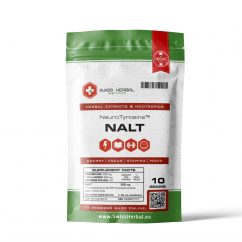 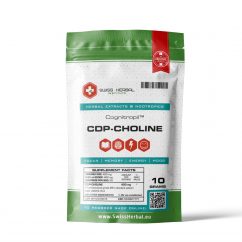 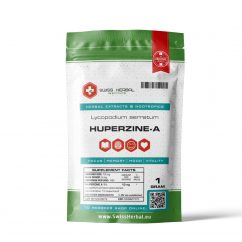 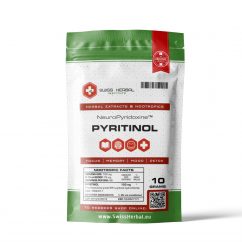 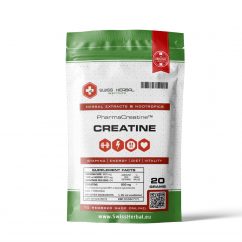 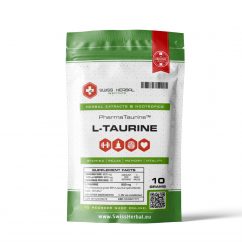 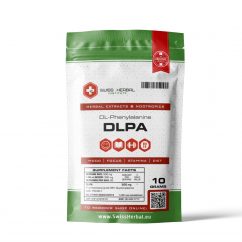 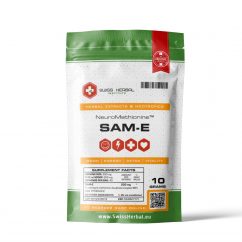 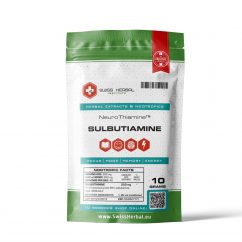 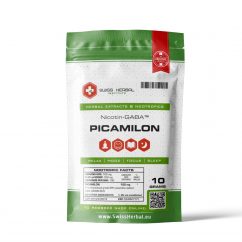